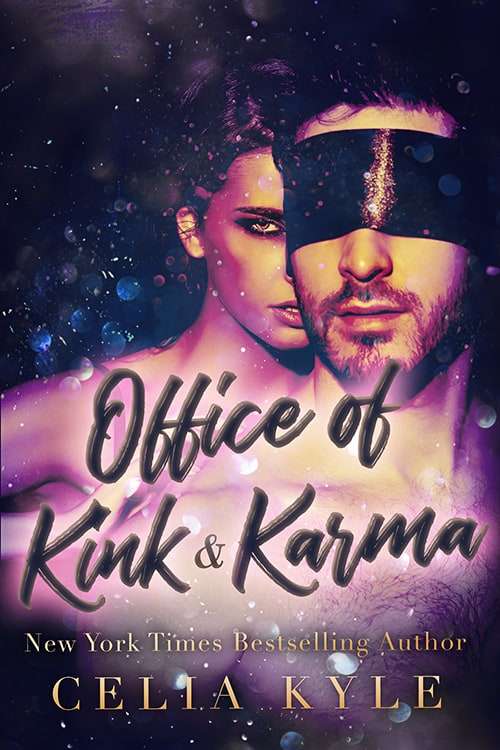 In a world where Normals and Extraordinaries are constantly at odds, Eric D'Amore is plagued with the ability to sense soul mates. A talent he puts to work on the case files of the Office of Kink and Karma…

Josh Martin doesn't care what the Council wants, he's not about to let them turn him into some boy toy. Until he's called to the Office of Kink and Karma, where he sees Emily's picture. Now he can't wait to get his thoughts -- and his hands -- on her.

What's a Normal gal to do when she meets an Extraordinary who can arouse her with the touch of his mind? Enjoy his every thought, of course.

Theo and Jackson are partners in love and life, but both of them feel something's missing. It takes an order from the Office of Kink and Karma for them to admit their desire for a woman in their lives. And not just any woman -- Lara Kinley. Together they set out to seduce and capture Lara for their own.

After playing matchmaker and setting up three couples, Eric D'Amore is ready to retire. To add to his stress, his used-to-be love and plaything, Melani, has shown up pregnant. To top it off, the office assistant he hired turns out to be a woman. Can things possibly get any worse? Of course. It's the Office of Kink and Karma. Case closed.

The soft ding of the elevator signaled Eric’s arrival at his apartment. His heels clicked on the marble floor as he stepped into the foyer. Such opulence disturbed him, but as his mother constantly reminded him, he needed to keep up appearances. The D’Amores are a respected family, she’d say. And he’d nod in agreement, like a dutiful son.

Dropping his keys onto the table, he toed his shoes off, leaving them in the entry and thanking the gods he’d dispensed with the butler and housekeeper long ago. Now he had no one moving things around when he wasn’t paying attention. His feet sank into the plush carpeting of the living room and he sighed in pleasure. Padding to the bar, he poured himself a drink. Maker’s Mark, three cubes, two fingers… heaven in a glass. After a long day at the office, it felt nice to come home to an empty—

So much for it being empty.

Eric didn’t have to turn around to see the woman standing feet from him. His mind reached out for hers, snapping back when it met the cold wall of her thoughts. He knew what she wanted. Melani wanted what she always wanted, a chance at his millions and a roll in the hay, whichever came first.

Eric began mixing his lover’s favorite drink, an apple martini. “Melani, love, I wasn’t expecting you today.” Drinks in hand, Eric faced his guest, unsurprised by her attire. As always, she dressed to impress… his cock.

Melani, a statuesque brunette with a lithe, lean figure, worked out every day, giving her a body the envy of any woman. But sometimes Eric couldn’t remember why he’d begun seeing her. Sure, she held a certain beauty; her deeply tanned skin, bright smile, and pale brown eyes seemed to draw him in effortlessly.

But she was using him. He knew it, and knew she was aware he’d discovered her plans early on. Being a powerful Psi Extraordinary had its benefits. Other than the gift which plagued him daily, he could also read the minds of others. It took one peek into her mind to discover her intentions, and yet he still made love to her, fucked her, whenever she dropped in.