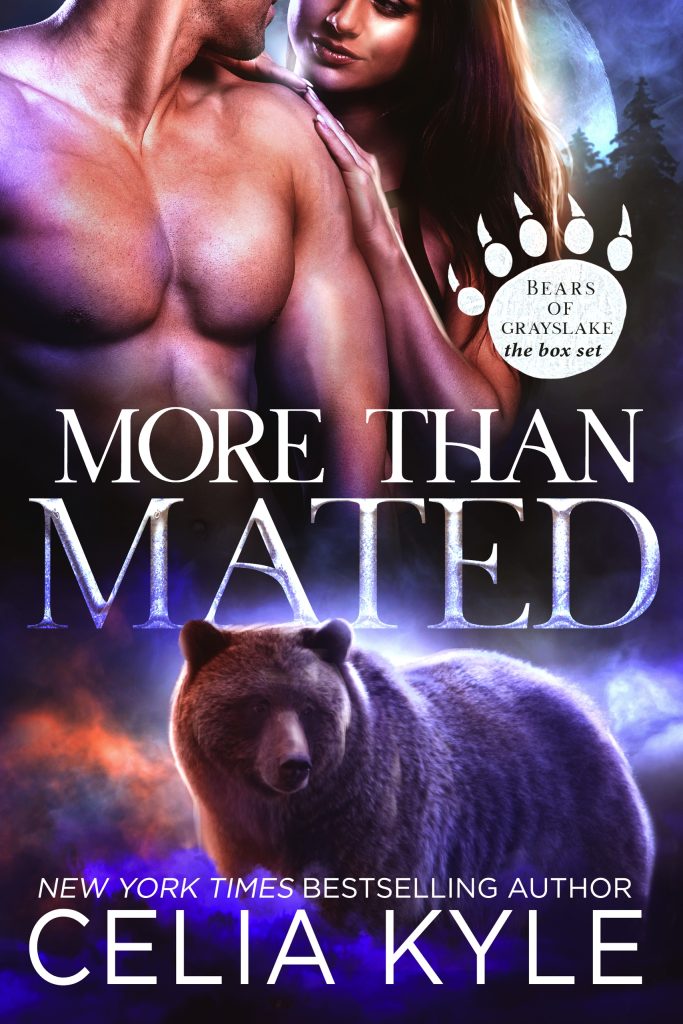 Six bestselling books of werebear hotness in one bundle and at an awesome price! Read about these werebear brothers who call Grayslake home as they find their own happily ever afters.

Mated to the Bear - The first day of Mia’s new life in Grayslake, Georgia is not going as planned. The house her grandfather left her looks ready to crumble, boxes cover every inch of the floor and—oh—there’s a bear cub in her pantry.

Claimed by the Bear - Who needs claws when you’ve got a baseball bat? Lauren Evans sure as heck doesn’t. Human Lauren has a protective streak a mile wide and one immediate goal in life—get her best friend out of an abusive household. If that involves a little bat-based redecorating, so be it. Unfortunately—or fortunately—a certain sexy-as-hell cop breaks up the fight before she has a chance to really get going.

Hunted by the Bear - What should Trista do when faced with a hunky werebear who can’t decide if he wants to kill her or screw her? Half-hyena, Trista has spent years rotating between Grayslake, Redby, and Boyne Falls. When the Grayslake Itan—the local clan’s werebear leader—orders a purge of all hyenas, she finds herself fighting to hold onto the hand-to-mouth life she’s created. Her carefully built existence is threatened further when a gorgeous werebear strides into her life and demands not just her heart, but her very soul.

Chased by the Bear - What happens when a half-blind weremole girl falls for a scarred werebear guy? A match made in furry, dirt-caked heaven. Mostly. Weremole Kira Kolanowski has spent twenty-nine-ish years of her life half-blind and occasionally half-dead. (Her family isn’t exactly loving.) In an effort to remain fully alive, she moves to Grayslake, Georgia, with her poor excuse for a guide dog—a guide dog who decides to lift his leg and relieve himself on sexy-smelling werebear Isaac Abrams’ belongings.

Seduced by the Wolf - Reid just killed her father. There’s no way Evelyn’s gonna mate him now… Dammit. Werewolf Reid Bennett has one goal: investigate the Brookfield clan’s Itan. Reports are coming in that the male is abusing his werebears and--even if he’s a werewolf--Reid will put a stop to it. Unfortunately, the resolution ends up being permanent and now Reid’s the clan’s leader.

Bared to the Bear - A Grayslake short story! Mia’s looking forward to a lazy Sunday afternoon with friends, family, furballs, and veggie dogs.

**This title is NOT listed on Amazon.**