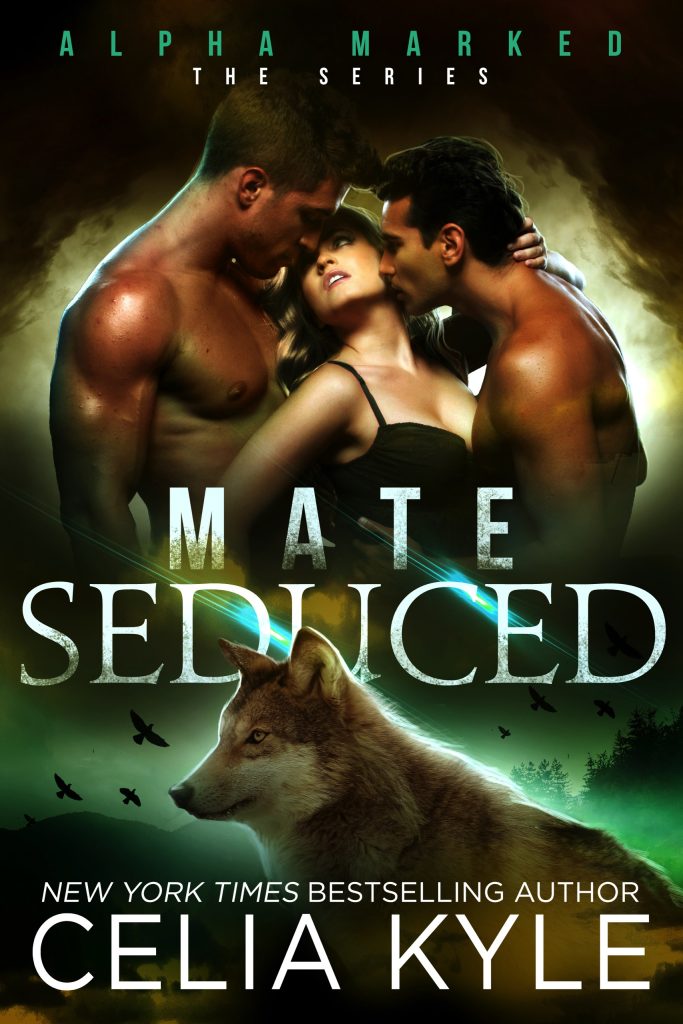 Thirty and single? Getcha ass to the Gathering!

Ugh. Gabriella Wickham thought turning thirty was bad enough, but now she’s been invited (ordered) to attend this year’s Gathering (werewolf speed dating). Having a Mark on her arm means that she’s one of the few human women destined to mate with not one, but two Alpha werewolves. Thank goodness werewolves don’t come in “ugly.” After her sister Scarlet mates the Ruling Alphas, things really start to get interesting. Gabby runs into not one, but two hotter than hot werewolves who make her tingle in all the right places. Yum. Of course, “yum” comes with baggage of both the mental and female kind. Lovely. Luckily it’s nothing a few punches and a good talking to can’t cure. Maybe…-ish.

Berke Davis and Jack Wright know that lush, curvaceous Gabriella is their mate. Who cares that they’re currently not part of an Alpha pair? Details, details. Burke has been half bound to his best friend Jack since they were four, but the past keeps them from solidifying their pairing and taking up the mantle of Alpha. Berke understands his friend’s feelings, but Jack is about to get a lesson on living and loving. Berke just hopes the lessons are learned before they both lose Gabriella. Especially when she is Challenged by a rival to first blood…a Challenge that could end in very permanent, and deadly, consequences…for Gabriella.

Talk about an awesome souvenir. The organizer for the annual werewolf Gathering had purchased the best pens ever. Gabriella found them sitting in a pile on the registration desk, and she’d snared one before the morning’s round of speed sniffing began.

It had the perfect balance for her to spin it around her fingers.

There was a brief pause and then she reversed the pen’s path.

Okay, officially? She was engaging in various Tests of Proximity, not speed sniffing. Her sister Scarlet had called it werewolf speed dating.

So now she had to sit at a table opposite two chairs while Alpha Pairs made their way around the room. Then they’d sit, sniff, and go.

See? It boiled down to werewolf speed dating.

Well, they weren’t only sniffing. There was this whole Mark thing going on, too.

Gabby sighed, hand automatically going to her left bicep. Stupid Mark. She’d been born with the thing. In a swirling triangular shape, the Mark was slightly darker than her overall hue and rose from her skin as if it were a scar. Present since birth, it signified her eventual mating to two—count ’em two—werewolves.

Which left her lounging around enduring the Test of Proximity with pair after pair while the one wolf who’d caught her eye lurked outside the ballroom. A glance toward the doors revealed that the man still skulked, moving like the predatory animal that prowled just beneath his skin.

Too bad she couldn’t mate a single wolf. Nope, individual wolves, those that weren’t Alphas and part of an Alpha Pair, mated other wolves and never humans. Only pairs ended up with a human Marked as their mate.

Except…except her Mark had reacted to the Captain’s presence. It’d heated and throbbed and screamed at her to rush into the wolf’s arms. Supposedly that only happened when a Marked was around the ones meant for her.

Funny how the guy she reacted to wasn’t part of a pair. He seemed dominant enough. But he was the Captain of her newly mated sister’s guards, which meant he was definitively not paired up and ruling a Pack.

Geez, her sister now had guards. Gah. Scarlet had not only mated the previous night—their first night at the Gathering—but she’d snared the North American Ruling Alphas: Keller Aaron and Madden Harris. Which left Scarlet out of the morning’s activities and Gabriella all alone.

Low chimes filled the air and then the shift of bodies relocating replaced the gentle sounds. Oh, look, time for the Alpha Pairs to move on to the next “lucky” (she almost snorted) lady.

Gabby sighed as she saw her next two potential mates approach.

They weren’t bad looking, like, at all. It seemed shifters didn’t come in ugly. Nope, they were all tall, muscular and gorgeous. While she, Gabriella Wickham, was short, plump and rather ordinary. Good thing a big part of mating was based on her Mark’s reaction and not the men’s attraction to her.

She sighed and was thankful her sisters couldn’t read her thoughts. They’d spent her entire life bitching at her about her Debbie Downer attitude when it came to men. They kept trying to convince her that men could love her just the way she was, big butt and all.

The two newcomers slid into the seats across from her, all predatory smiles and leers. God, were wolves this hard up that they were looking at her with sex on the brain?

Pasting on a purely fake smile, she held out her hand. “Hi, I’m Gabriella Wickham. My friends call me Gabby.”

Knowing what was coming, she kept her expression frozen in place. The first guy didn’t even bother to introduce himself. Nope, he gently gripped her hand and brought it to his lips. Actually, his nose. The first time it’d happened she’d nearly swooned at the seductive gesture. She’d thought the wolf was going to brush a kiss across her knuckles like some gallant man of old. As if. The guys were really taking a good whiff to see if she belonged to them.

He turned her hand over and slid his nose along her inner-wrist, sending chilly air rushing over her skin. The seductive light in his eyes instantly dimmed.

Yeah, she could have told him she didn’t belong to them. The Mark on her bicep wasn’t doing jack shit. No pulse-y ache, no heat, no throbbing of her pussy that said “Ooh, take me now!” None of it.

But the guy didn’t seem eager to brush her aside. Still silent, he handed her off to his other half, and that man cradled her hand within his, bringing it to his nose to give her the same treatment. The hint of desire in this other man’s gaze immediately lowered to casual appreciation.

He released her slowly, and she pulled her arm back to her side.

“So, you are…” She let her question go unsaid, but still the Alpha Pair remained quiet, their lips pressed together until they formed thin, white lines. Now their bodies vibrated with barely suppressed agitation. So, they wanted to get on their way now that they knew she wasn’t their mate. “Okay then.”

Gabby slumped back into her chair and resumed her pen spinning.

The stupid ding hadn’t sounded yet. Damn it. Movement to her right showed a smiling trio rising from their seats, hands clasped and moving away from their table. The two men enfolded the woman in a hug, hands roaming as they embraced her. A glance around the room revealed that all eyes were on the trio, looks of fierce longing on every male’s features.

Gabby huffed out a breath, suddenly reminded of the wolves’ nature. The Alpha Pairs could lead happily without their Marked, but couldn’t rule indefinitely unless they had a woman to offset their violent tendencies.