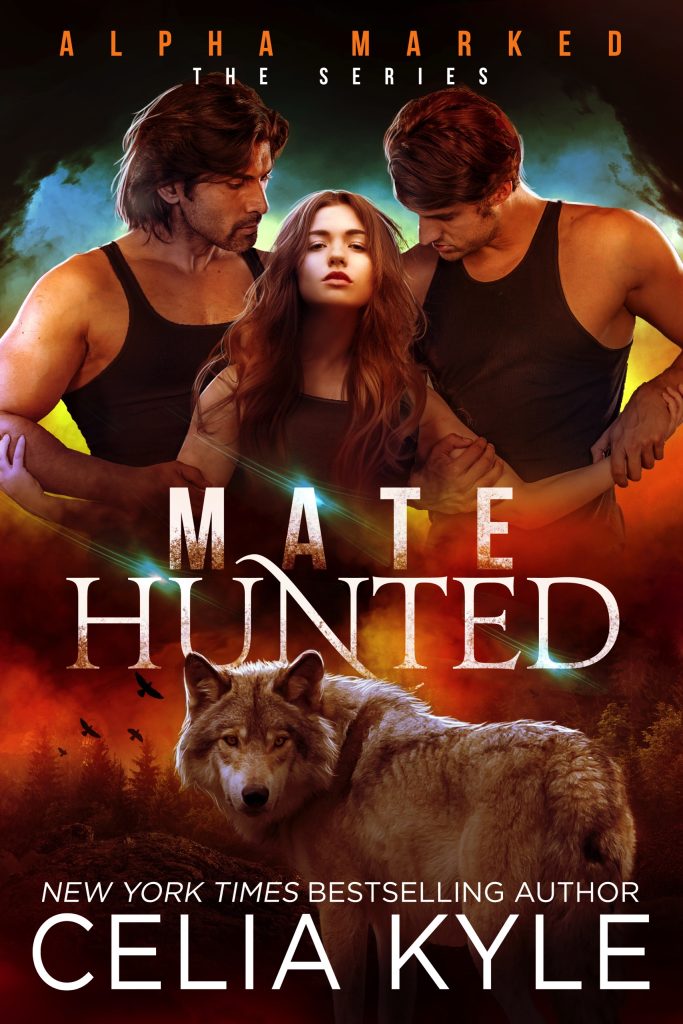 Thirty and single? Well, getcha ass to the Gathering! Wait… what?

Rebecca Twynham hates nature, loves a juicy steak, is not Marked, and thinks wolves come in one form: on four feet and with fur. So when she’s hauled to the annual werewolf Gathering by this scary as hell magical vortex, she’s pretty surprised to find out werewolves are real. With that new knowledge, she finds she still hates nature, she’d love a juicy steak, and maybe—she might be—Marked. Well, she doesn’t see a Mark, but she also has heavy scarring from a childhood accident—or was it intentional? Plus, she really wants to climb the gorgeous Alpha Pair, Aidan and Carson, like a tree. Luckily the two hot werewolves wanna sink their roots into her flower and… The nature analogies have gone too far.

Aidan and Carson have been a strong Alpha Pair for fourteen years. They’re tied together by their bond, and ache to claim a woman as their own. But while Carson has always been the GQ ladies’ man, Aidan has been the afterthought—the heavily scarred and frightening werewolf who’s caused more than one woman to faint.

When they find Rebecca hiding in the Bad Doggie ballroom, they rejoice that they’ve finally found the one for them. Except with curvaceous, delicious Rebecca, their roles are reversed. Instead of rushing into the arms of sleek and sexy Carson, Rebecca clings to Aidan. Carson should rejoice in her acceptance of Aidan, but jealousy rears its ugly head, destroying their triad before it has a moment to form.

Then things go from jealousy-driven bad to worse when the five families decide there won’t be any more Wickhams joining the wolfy family trees.

Oh, right, she forgot that part. Apparently her Wickham cousins are kind of a big deal in werewolf land. Big.

Dirt was the most horrible thing ever created. It smelled and got everywhere and itched when it dried—which meant Rebecca had been wet at some point—and was all around gross. She wanted a shower and a bed. Now. She glanced at the man stomping along the trail beside her, at his wide smile and the way he hadn’t tripped over every tree root known to man.

The bed would be empty. Very empty. The vast emptiness of the empty couldn’t even be put into words it’d be so empty.

The guy grinned at her, his brown hair flopping over his eyes. Had she thought that was adorable?

“Isn’t this awesome?” Tony? Timmy? Joseph! Hah! It didn’t sound anything like those “T” names, but she finally got it right. So, Joseph spoke.

“Oh, awesome.” She plastered a totally fake, painstakingly practiced smile on her lips. It wasn’t a happy one. No, it was the one that said “are you fucking kidding me?” It was kinda toothy and big and her eyes were open wide.

Joseph, the lovely Joseph, who apparently could only read books and not people, seemed to perk up. “I know, right? And around the bend we’ll see…”

He was talking nature again. Which, to be fair, they were surrounded by the wondrous world of Faunsdale Nature Preserve, so it made sense.

Why, oh why, had she agreed a hike through the preserve was a good idea? When she’d said yes, she’d managed to sound excited over the phone. And maybe she had been. A little anyway. After all, it’d been a while since she’d jumped into the dating pool. It was as if she played the hokey pokey with her love life. She’d put her left foot in, get it bitten by a blood-sucking evil snake, then pull it out and shake it the fuck about.

Snakes. She bet there were snakes in the woods. Evil blood-sucking ones who walked on two legs.

Joseph pulled ahead of her—his longer legs meant bigger strides—and she stared at his back. Was he one of those kinds of men?

It didn’t matter one way or the other. After all this back to nature stuff, she was all about not having a second date with him. If this was first-date material, she’d crumble into a fluffy heap of “kill me now” on the next one.

“Coming?” he yelled back to her.

Rebecca cleared her throat. “Yeah, right behind you!”

Then that expanded further and… Was he getting taller?

A large brown and green sign announced they were climbing Fwansis Hill.

“Joseph?” He did not turn around. “Joseph?” She raised her voice and he turned toward her, massive smile in place.

Rebecca waved at the sign. “I thought this trail was a three on the difficulty scale?” She tried to keep the accusation out of her voice. She didn’t want to piss him off, he was her ride home, after all. “This sign says the hill and beyond is six plus.”

“Oh,” he shrugged. “You were doing so awesome. I thought we’d go a little farther. There’s this great clearing on the other side. We can eat our lunch there.”

Now he bounced on his toes like a kid waiting to open Christmas presents. Exhausted as all get out, she moved to follow him.

Doing awesome? Hardly. When he’d told her of his plans, she figured she’d be fine. Hiking was probably harder than walking on a treadmill, but she also did Water Zumba when she wasn’t working on her slowly ambling cardio. The hike should have been cake.

She so deserved cake after this.

Hefting her backpack higher on her shoulder, she trudged after the man. She forced one foot in front of the other, ignoring the dampness of her socks. Stupid rain with its stupid wetness.

Joseph reached the peak before her and disappeared over the other side. No matter, it wasn’t like she’d get lost. The trail was so worn it made her path clear. Plus, some parts were paved and benches were placed sporadically along the route.

She passed one such bench and eyed it longingly. What she wouldn’t give…

“Rebecca?” Joseph’s voice reached her, and she sighed.

Or he could come back down the damned hill, pick up her fluffy ass, and carry her to their picnic spot.

Instead of pouring out her frustrated, borderline rage-y heart, she imbued her tone with sugary sweetness. She’d already established he didn’t get the finer nuances of the Rebecca language. “Sounds awesome!”

No other shouts came over the hill and Rebecca sighed. This was definitely the first date and last. If a hike through the forest was this guy’s idea of a good time, it so wasn’t going to work.

Rebecca slogged over the rise, tempted to let her backpack fall from her shoulders and drag on the ground, but she kept it in place. She imagined she already looked a ragged mess, no sense in adding to the disgusting picture she painted.

She spied Joseph off to her right, standing near the tree line, and it was the first time she realized the forest didn’t surround her any longer. No, the dense trees were on her right, but the left was open and cleared, giving her a perfect view of the preserve. Not all of it, but at least they got a good look at the valley below. The area was filled with flowers and a brook cut a path along the edge. It was a gorgeous sight.

Especially the water. Could she rinse off? Or rather, dump her whole hot and sweaty ass in?