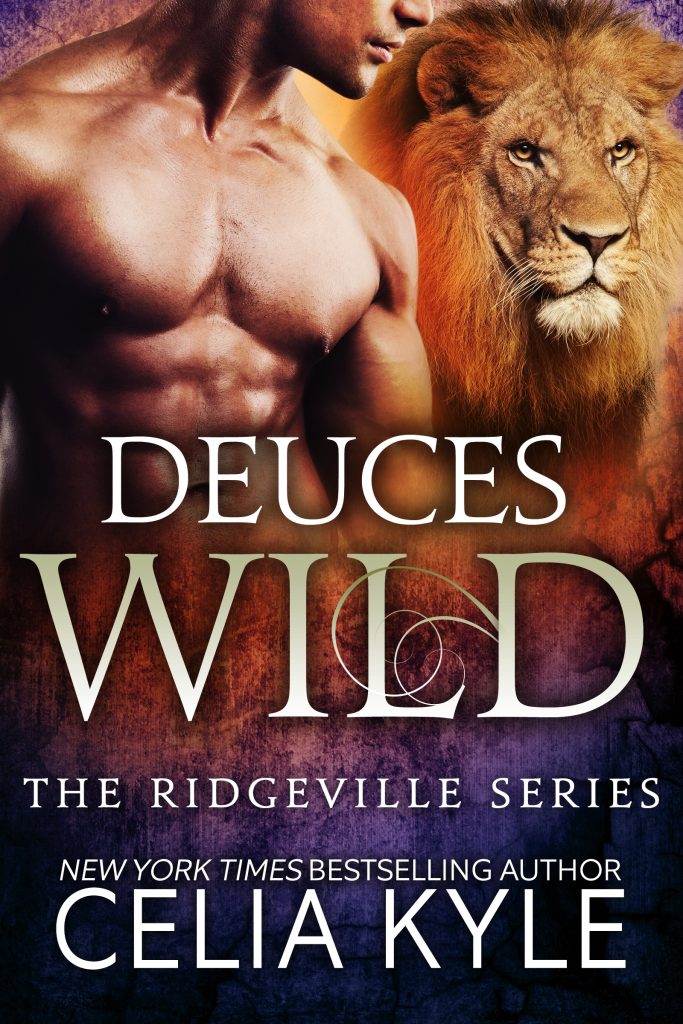 Squirrel shifter Elly has been captured by Freedom, beaten, and then handed off to be raped. Only her new hotter-than-hell jailor, Deuce Pierce, isn’t keen on forcing her and is all about saving her curvy, furry ass and getting her to safety. After she’s freed, she can’t forget about the lion who saved her life, and she hunts for him, determined to find the man who haunts her.

The council has tried to keep Deuce separated from Elly, convinced he’s abused her in some way, as if he would hurt his mate. He finally beats (literally) her location out of one of their soldiers, only to find she lives in the hometown he’d vowed to leave behind. His lush squirrel may be happy to see him, but the townspeople and their families take up where the council left off. Good thing he and Elly have wicked teeth, sharp claws, a gun or two, and more love than any two people ought to share. Because no one is going to separate them, come hell, high water, or shot-out knees.

“Life is not WYSIWIG. There is no ‘what you see is what you get’ thing going on. Because, hey, people wear clothes and stuff. Or they’re liars. So, get ’em naked or shoot them. Just don’t get blood on the carpet.” — Maya O’Connell, Prima of the Ridgeville Pride and a woman who’s decided that twins are overrated and that two is never ever better than one.

Deuce wondered when the curvy little woman standing at Alistair’s back would make her move and rip out the polar bear’s jugular.

He guessed five minutes. This was unfortunate since he had a good hand and he figured he’d be winning pretty soon. He, Alistair—leader of Freedom, a shifter antiestablishment militant group—and two others had been sitting around the poker table for a few hours. Deuce was one flip of a card away from taking the last of the man’s money in this game of Texas Hold ’Em. The turn had been revealed and Alistair had raised. The rest of them called, easily meeting the new amount. Now he needed the river card to come through for him and he’d win the pot.

But the woman standing behind the leader and flanked by two guards looked like she’d happily end the polar bear’s life.

She was beautiful, despite the bruises and dried blood peppering her face. Deuce fought the attraction that had been prodding him since the moment he’d walked into the room and settled in a chair. Regardless of her wounds, she stood tall, glaring at Alistair anytime he chanced glancing at the female.

With the room filled with heavy, sweet cigar smoke, he couldn’t catch her scent. He wasn’t quite sure if she was a shifter or simply a human who’d caught the leader’s eye. Based on her fresh, deep bruises and the dirty looks she kept flashing to the room, the woman hadn’t been too keen on being taken.

He’d heard the rumors about the woman, speculation that she was anything ranging from a senator’s sister to the relative of a powerful shifter family. Deuce figured the latter explanation was closer to the truth.

He leaned forward, grabbed his quickly emptying can of light beer, and swallowed a mouthful of the bitter brew. Even after all these years, he had trouble getting past the taste of the specially formulated liquid.

“Can’t believe you drink that shit.” The grumbled words easily cut through the smoke-filled room. It was the hyena on his right. Big fucker. Without a doubt, he was twice as wide as Deuce. But Deuce had training on his side and the other guy knew it.

Deuce’s fangs burst from his gums in a flash and he hissed at the larger man. His lion purred in approval. He’d been going through this shit from the moment he’d joined Freedom, constantly having to prove his dominance over the others. It had gotten him this far, securing his place in Alistair’s inner circle and closer to his ultimate goal.

“Enough.” Alistair’s voice was quiet and Deuce’s beast wanted to turn his feral attention to the polar bear. In truth, the man wasn’t as strong, fast, or lethal as he and his lion, and it’d take no time to take him down.

But he couldn’t make his move, not yet, not when so much was still unanswered. He had a lot more intel to gather for the council. A lot more.

The woman suddenly moved, dived past her guards, and attacked the seated leader. She wrapped her fingers around Alistair’s throat with a flash of claws and encircled his neck, tips digging into the flesh at his throat.

Alistair’s men forced her to relinquish her grip, and then shoved her back, her body colliding with the wall and cracking the smooth surface.

Deuce swallowed his fury, pushed the lion in an effort to keep it from emerging. His beast lurked beneath his skin, rippling along his muscles. He forced his heart rate to remain steady, urged his cat to control itself. They couldn’t afford to let their true feelings show.

He hated violence against women, but there was nothing he could do. Not yet. He had a job to do and he couldn’t sacrifice his mission. He studied the men bracketing the woman and committed them to memory. When his job was complete, he’d visit those two in their jail cells. Privately.

Rage filled every line of the polar bear’s features and the man wiped at his bleeding wounds with a napkin. Placing the crumpled, red-tinged bit of cloth on the table, he rose and gave his back to the room. Alistair took two striding steps, blocking the dazed woman from Deuce’s gaze. The sound of flesh against flesh echoed through the silent room. Based on the thud, he figured it was a backhanded slap rather than a punch.

“Bitch.” Alistair spat the word and then, as if nothing had occurred, returned to his seat, easing into the padded chair.

The leader reached out and flipped the river card, appearing not to have let the interruption bother him in the least.

Deuce. Funny, last card revealed happened to be a wildcard.

Deuce took turns in observing the men surrounding the table from beneath his lashes, checking them all for tells he’d observed during their play. The guys to his left and right had nothing. Alistair remained.

He hadn’t discovered anything about the polar bear that would clue him in on the man’s hand. No flick of his eyes, throb of a vein, or dilation of his pupils. Nada.

A glance at the chips in front of Alistair revealed that the man didn’t have enough to even hit the minimum bet. Deuce wasn’t sure what the shifter was up to. He should have folded before now. Unless he’d been praying for a miracle.

With the last card faceup, the leader was set to begin this round.

“It seems I’m at a slight disadvantage.” The polar bear smirked. “Let’s make it interesting.”