Dashing Through the Stars 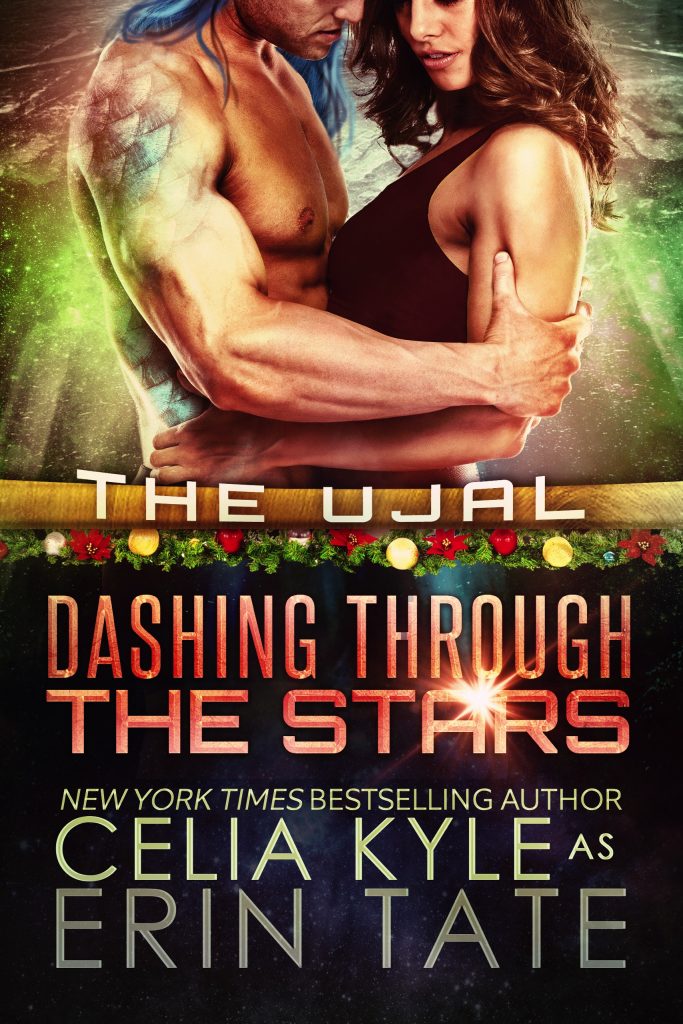 The holidays are a time of love, joy, and… meeting a new alien species?

Prince of the Ujal, Tave fa V’yl-Zeret, will do anything to make his mate happy. Even if that means celebrating a holiday he does not understand. (Tave does not care what human lore states, a single human could not circle the globe and deliver toys to every child.)

This year’s biggest concern isn’t whether he purchased enough toys for his youngling, but the alien battleship that enters Earth’s orbit.

Are they friend? Or foe? Will Tave’s family and friends live to see Christmas morning? Or will they all perish on Christmas Eve? For there is a humbug willing to go to any lengths to stop peace talks. Lengths that include kidnapping royalty and… assassination.

Tave woke to sensuous kisses and delicious caresses from his mate’s small hands. She stroked his chest, her soft hair brushing his skin as she explored him. Those delicate fingers danced down his abdomen and his scales trembled just beneath the surface, threatening to appear. Yes, she wrenched that much control from his grasp.

Rina did not pause in her attentions, continuing south until she reached his shaft. It did not take him long to catch up with her passion and he hardened within moments of that first touch. Then she tormented him. She stroked him from base to tip, drawing his need forward until he focused entirely on her touch, on her hand barely encompassing his length. Tingles of pleasure shot through him when she rubbed her thumb along the tip of his shaft.

He groaned and flexed his hips, reveling in the slide of his cock through the circle of her fingers. She used his pre-cum for lubricant, making each new thrust easier than the last. The scent of his desire entwined with hers. And her sweet musk… It tangled with the crisp salty air, filling his lungs with two things he loved most—his mate and the sea.

“Rina,” he murmured and found he could not remain still any longer. He reached for her, teasing her as she tempted him. Tave traced the curved lines of her form, palm skimming her waist and flare of her hips. Her skin was silken smooth, more rounded after her pregnancy with their youngling, Theresa, and he loved her added curves.

She was lush and delicious, her body begging for his hands, his mouth. She had other marks from her time carrying Theresa—what she called stretch marks—but he saw them as battle scars. Proof she fought hard to carry their daughter.

It made him love her all the more.