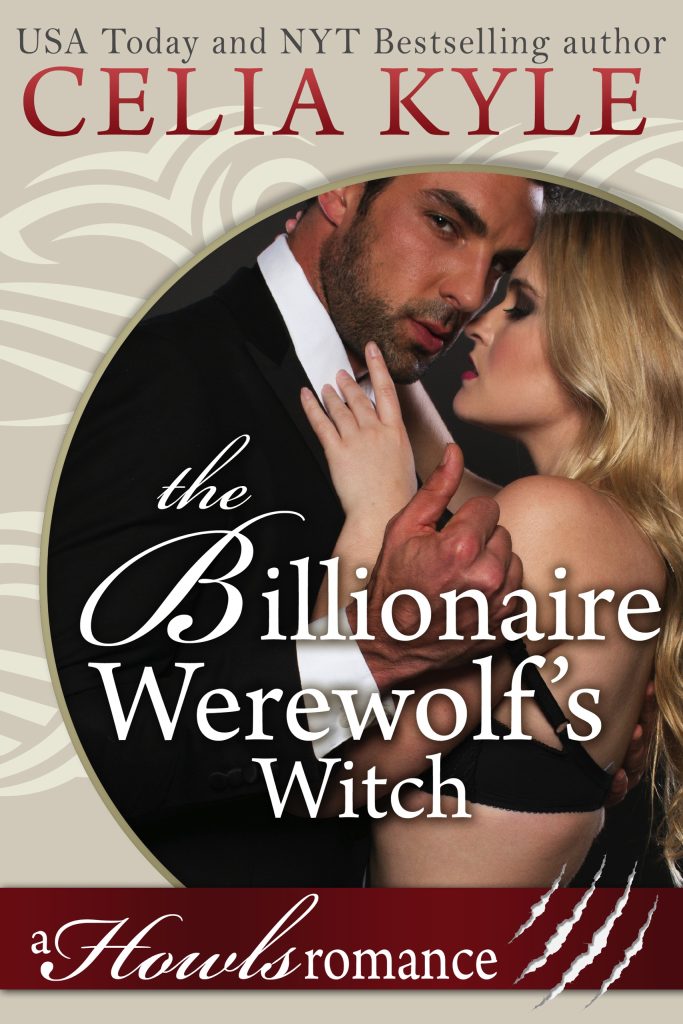 Rachel Riordan is not a lawyer. Not even on TV. She's a secretary, and not a very good one at that. But when billionaire Grant Hemming, President of Hemming Industries, asks her to look over a contract, she does as she's told. Since, in addition to signing her paychecks, he's superhot.

In between reading clauses and sharing kisses, several things come to light:

She's a witch. (They happen to be hated by the werewolves.)
He's a werewolf. (Remember, they hate the witches.)
They're mates. (Talk about awkward.)
And, oh, vampires want them both dead. Isn't that just like them?

Movement in Rachel’s peripheral vision grabbed her attention and she turned her head to find the biggest man she’d ever seen, clad in black leather, standing outside her cubicle. “Uh, Gigi, gotta cut it short. Someone just showed up.”

Rachel stared at the man before her, gaze traveling up his body (and up and up and…) until she finally settled on his face.

Not waiting for her friend to acknowledge her words, she dropped the handset into the cradle and gave the man her attention. She’d seen him around the office, trailing after the president of the company, and the sight of him always sent a tiny sliver of fear racing down her spine.

“Mr. Hemming needs your assistance with a contract. Follow me.”

She gulped. Look, more fear. Even She-Ra would have been scared of this guy. “I’m not a lawyer.”

“Today you are.” His voice was deep and gravelly. Probably from the cigarette dangling from his lips. It most certainly was not because he might be a werewolf. She’d heard rumors, and her Great Aunt Petunia had clued her in on their characteristics.

“Let’s go,” he grumbled around his smoke.

Didn’t he realize that Hemming Industries had a strict no-smoking policy? Even if the person had a habit before being hired, they were soon browbeaten into giving up the cancer sticks. Then again, he was probably too big and scary for anyone to nag him.

She was hungry, damn it. She had a date with some Chubby Hubby ice cream and a pepperoni pizza. In that order. Didn’t the guy realize that it was her order out slash cheat day? Once a month, she splurged and got take-out. With money being tight since she sent anything left over after bills to Great Aunt Petunia to help the woman get by, she cherished these days. Getting to toss her not a diet diet out the window was just a bonus. A big one.

A growl filled the air. An honest to God growl. And the man rolled his eyes. She’d seen the guy around the office, always walking two steps behind Mr. Hemming. Since Grant Hemming was the company’s president and one of the top ten richest men in the world, she wasn’t surprised that he had some sort of scary-as-hell, maybe-werewolf bodyguard.

She just hadn’t expected the man to show up in her cubicle. Ever.

The man, Hagan from what she recalled, took a drag then dropped his head back to stare at the ceiling, blowing the pale smoke into the air. “Look, Miss Riordan, I know that you normally don’t handle these types of situations—”

“Never. I’m not a lawyer, so I’ve never pretended to be one. Not even on TV. I’m a secretary and only half-way decent, at that.” She really didn’t want to do whatever it was Hagan needed. What if she screwed up? She needed her job. Needed, needed with a capital need. Great Aunt Petunia couldn’t survive on her fixed income and depended on what Rachel sent along.

Another growl, deeper than before, and his gaze focused on her. Did his brown eyes have a hint of amber? She hadn’t noticed that before. Then again, he was gigantic, and it’d taken her a minute to get past his massive size when he’d first stepped into her six-foot-by-six-foot space. He looked to be taller than her cubicle was wide.

She should have never taken this job.

“Are you a law student or not?”

Rachel furrowed her brow. “Well, yes. I mean, I was. I haven’t taken a class in a while, but—”

“Then, let’s go.” A large hand wrapped around her bicep and tugged her from her square haven.

“Hey! Just because you’re bigger than me doesn’t mean—”

“Yes, amazingly enough, it does. Let’s go.” He tugged again, and she realized that resistance was futile. She would be assimilated, er, dragged along against her will.

With a sigh, she followed along, allowing the man to lead her through the hamster-like trail that was the general secretarial pool. He led her down the twisting and turning path to the elevator, still keeping his grip in place during their ride to the top floor.

Hagan merely nodded at the secretary outside what she assumed was Mr. Hemming’s office doors and then entered the space, not even bothering to knock.

“That’s right, cancel the—” Mr. Hemming’s attention turned to her for a brief moment, and he stiffened and paused in the middle of his sentence. “Cancel tonight’s picnic. I’ve got a few loose ends to tie up. Reschedule for Friday.” Without bothering to say good-bye, he hung up on the other speaker and gave them his entire focus. “Hagan?”

Was he growling too? Good lord, the eighth richest man in the world was probably a werewolf. She’d stumbled into an amber-colored nightmare of ginormous proportions. It was one thing if it’d been a single guy, but the president of the company… If the head of Hemming Industries was wolf-tastic, who knew how many he employed.

Wrenching her arm from Hagan’s grasp, she put a bit of space between her and the guard. “Mr. Hemming…”

The man’s gaze captured hers, his dark brown eyes seeming to lighten as she stared at him and his chest expanded when he took a deep breath. “You’ll call me Grant.” Then he zeroed in on the bodyguard. “Hagan?”

“This is Rachel Riordan. She’s from downstairs and is pre-law. I figured she’d be as unbiased as they came.” The large man shrugged. “It’s not like she knows anything.”

“Hey, I think I’m offended.” See, she could pretend ignorance of the supernatural with the best of them.

Hagan flashed a grin in her direction before returning his attention to Mr. Hemm—Grant. “She’s feisty.”

“She’s taken. And so are you.” Another growl from Grant. No wonder the man had to resort to practically abducting her for help. He’d probably scared away everyone else. Except other wolves. If he was a wolf. “Leave us.”

Plus, dude, taken? What the hell did he mean by that?

Hagan stiffened beside her. “Alph—Boss, I haven’t checked her for weapons. Give me five minutes—”

She cut him off. “Um, I promise not to kill him? All I’ve got is a Bic pen.” She dug in her pocket and presented it to the larger man. “See? I’m harmless.”

“See? She’s harmless.” The deep voice drew her attention back to Grant as well as that wide, toothy smile. My, what big teeth you have. Maybe he just had a twisted dentist. “Go.”

That single word had Hagan retreating and disappearing behind the heavy wood doors, shutting out the rest of the world…and shutting her in with Grant Hemming.